Future Projects:
We are continually striving to make the Nature Reserve a more interesting place for the local community.
In 2013 -2014 we built the Activity Trail and we have further projects planned for the future – so we need your help! 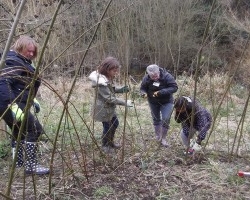 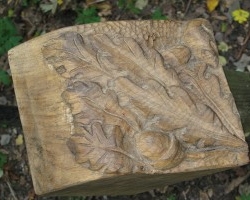 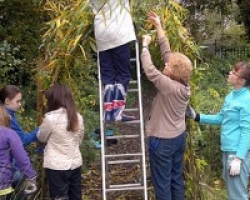 Pond Embankment
The embankment at the edge of the main pond requires reinforcement and the wooden railings running along the top of the embankment, which were installed over 10 years ago, need to be replaced. This is a major project for the group in terms of complexity, cost and the number of volunteer hours required to complete the work. In October 2021 we applied to Chelmsford City Council for a grant under the Greener Chelmsford scheme to pay for the materials and this application was successful. The work will be conducted by a team of volunteers supported by Chelmsford City Council Parks Department in weekly sessions. A project plan has been compiled with a target completion date of the end of February 2022. The first stage, to shape the embankment and create a solid base has been completed (see photograph below). The next stages of work are to lay membrane and a base layer prior to installing the 500 soil and gravel filled bags that will be used to restore the embankment edge. The bags will be pre-seeded with plant seeds to provide a natural looking embankment to the pond. Once this work has been completed new railings made of recycled plastic will be installed along the embankment edge. 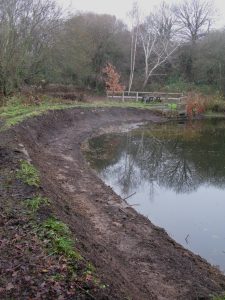 New Pond Dipping Platform
Our existing pond dipping platform, which we built in 2010, is beginning to show its age! It is also not big enough now for our community group visits so we plan to construct a new platform. This project will commence once the embankment work above has been completed.

Sculpture Project
We worked with Mike Barter, a local Artist and Sculptor who carved 4 beautiful oak sign posts for the site. These show the name of each area of the site and feature the wildlife on the reserve. The reverse of the sign post has a design which can be ‘rubbed’ with crayons, and other information about the wildlife featured on the post. We hope to involve one of our community groups who volunteer on a regular basis in working with Mike on a future sculpture project, possibly designing a bench or creating other natural features on the nature reserve. The posts were installed in November 2016 and January 2017. Funding for this project came from a legacy left by one of our early supporters.

We began building the ‘living’ Willow Dome in January 2013 using willow branches cut from the willow arch, constructed in January 2009. Two of our local community groups of Girl Guides are regularly working on this  project.

The old bug hotel was built in January 2010 and the bugs definitely needed a new home. This project was completed by the Guides and other young volunteers in 2016. The new hotel is a bigger structure and has a green roof with plants to attract insects and make the bug hotel interesting to look at. We managed to re-cycle most of the old hotel into the new hotel, and make additional layers to attract more wildlife. thanks to all who donated broken plant pots, shells, collected fir cones etc.