2. The Early History of the Site 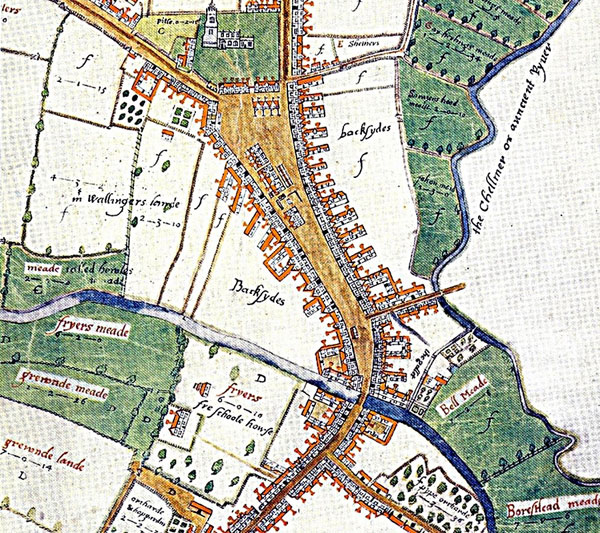 2.1. To appreciate the early history of the site it is necessary to imagine it without the massive railway embankment that now dominates its eastern flank and without the Village housing estate or the E2V works on its other borders, between Writtle Road and Waterhouse Lane.  On the Chapman and Andre map of 1777 (Our earliest map of the site that shows any useful detail), it is just an area of farmland and orchards.

2.2. The site remained undeveloped until the railway came to Chelmsford at the beginning of the 19th. Century. Until then the whole area, of pasture and orchards, was owned by the Mildmay Estate. Then, in 1838, the Mildmay family sold a strip of it to the Eastern Railway Company for 10,000. Before then they had been unable to dispose of any of the estate because they could not escape from what Chelmsford historian, the late Hilda Grieve, describes as, .the legal straightjacket which had hampered sales of their entailed estate.  The 1833 Act for the Abolition of Fines and Recoveries simplified a complicated situation and enabled the sale of land to the railway company to proceed.  The Chelmsford Tithe Map of 1843 shows the area known as Further Field and Gold (or Golden) Field bisected by the railway strip but, as pasture land, let out by Lady Mildmay to one George Simpson.

2.3. The Mildmay estate had been established by Thomas Mildmay, in 1540, when he purchased the Manor of Moulsham, which had been surrendered to Henry VIII by the Bishop of London.  The Mildmay name first appeared in Chelmsford history in 1506, when Thomas father had acquired a stall in the market.  Thomas himself prospered and became a Crown official, The Auditor, and gradually established the estate by purchases of former religious property, including the Friary, which had been dissolved in 1538 and, in 1563, the Manor of Chelmsford. When he died, in 1566, he handed on a considerable amount of property, including the town itself, to his eldest son, the first Sir Thomas Milday, Knight.  From this time the estate was entailed to the nearest male heir; so that the following three hundred years saw a rather complex pattern of inheritance until the entail was broken in 1833, as noted above.  Like that of so many old families, the Mildmay Estate had arisen from what might be seen as the first great privatisation, under Henry VIII, as a result of his difficulties with the established Church that led to the dissolution of the monasteries and sequestration of Church property.  Thomas Mildmay was an astute Tudor.  In Chelmsford Cathedral there are two impressive Mildmay tombs, reflecting the wealth and status of the family.