3. The Industrialisation of the Site. 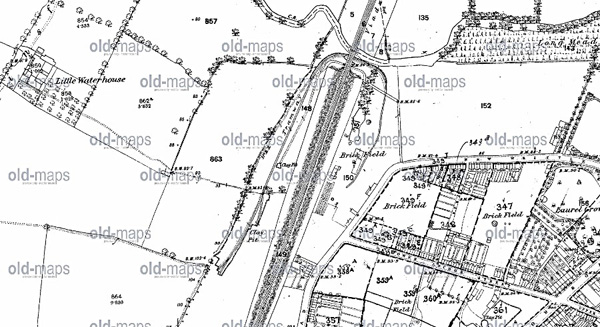 3.1. Clay Pits and Brickfields.  It was not until after the coming of the railway and the building of the embankment to carry it across the River Can and into Chelmsford, during the second half of the 19th. Century, that land on either side of the railway was developed industrially.

3.2.  It is sometimes though that the pits that became the ponds were created when spoil was moved to make the railway embankment.  Although this was the case for the lake in Central park, on the north side of the River Can, the spoil for the embankment alongside the Marconi Ponds site probably came from the cutting running into Widford and, possibly, from the Galleywood Common area.

3.3.  Industrial development came in the mid Nineteenth Century when brick works were established on the east side of the railway embankment, in the Upper Bridge Road area. These were served by clay pits on what is now the wild life site.  It is sometimes suggested that these brick works were developed to provide bricks for the railway viaducts that carry the rails through Chelmsford and over its rivers but the clay workings and brick fields were not started until after the viaducts had been built.

3.4.  The first reference to a brick field around the Upper Bridge Road area is in 1843, in the Tithe Record for that year. Records of various companies and individuals engaged in the brick business continue up to the end of the century and for a few years beyond. For example, the Anchor Brick Company from 1878 to 1886 and one James Brown from 1874 to 1902.  However, the clay pits and brick kilns have left a distinctive mark on the history of Chelmsford.  A vein of grey clay was discovered which produced the easily recognised light coloured bricks that are known as, Mildmay Bricks.  They are evident in buildings all over the town.  An advertisement in the local press, in 1855, mentions a royalty on white bricks and tiles produced in the Upper Bridge Road brickworks. 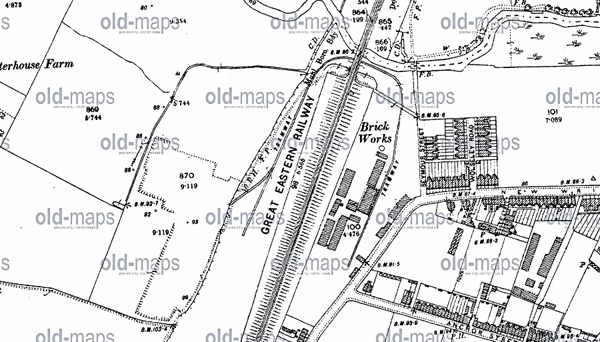 3.5.  The clay pits were connected to the brick kilns in the Upper Bridge Road area by a tramway that ran along the pits, under the viaduct and into the brick fields.  In 1867 Mr. Fell Christy had applied to the local authority for permission to lay a tramway across the road near his Anchor Street brick field.  It is not clear whether this was the origin of the tramway or merely an extension. The 1875 OS map shows it running the full length of the clay pits, right up to the area now occupied by the ponds but not across the road (Then known as New Writtle Street, now Upper Brgidge Road.) into theAnchor Street Brickfield. Perhaps permission had not been granted. The 1896 OS map shows that the rails had been cut back to the northern end of the site. The tramway was out of use and removed by the turn of the century. There is no visible evidence of it now. However, it will be noticed that most of the wildlife site sits in a depression, below the level of the adjacent footpaths.  This is evidence of the abandoned clay pit workings. (The tramway was a light, narrow gauge track and should not be confused with the main railway siding that was constructed to serve the Arc Works Site, set up by Cromptons at the end of the Century.  See, 3.7, below.)

3.6. Modern Industry.  What is now the wildlife site is only part of the land that had been occupied by the Crompton Arc Works. The works site was bounded by Writtle Road, Crompton Road, the railway embankment and the present E2V site.  Apart from the ponds themselves, none of the industrial owners made any significant use of the strip of lend that makes up the wildlife area. 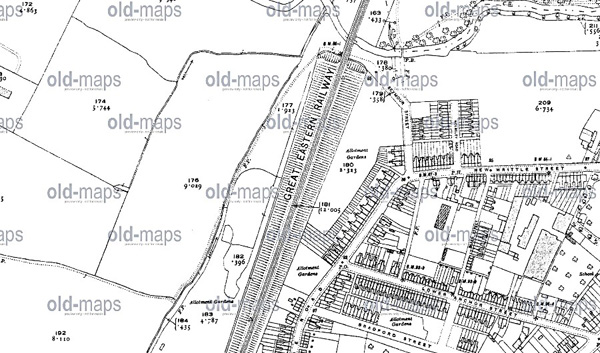 3.7.  Industrial building began on the site in 1896, when Crompton and Company purchased it and constructed the building that now stands along Writtle Road, between Crompton Street and the Parkinson Drive roundabout leading into the Village.  The company was expanding from its Moulsham Street, Anchor Street location.  Its founder, Colonel Crompton, was a self-sufficiency enthusiast and planned to make this new industrial complex independent for water and sewerage services. An artesian well was established near the new building in Writtle Road, providing potable water.  The waste or surplus flowed into tanks and ponds that supplied cooling water for industrial plant and flushing water for lavatories. All the water finished up piped to filter beds the two pieces of water that we now know as, The Marconi Ponds. From there some of it was pumped back as required to top up the tanks on the industrial site.  The ponds ceased being used as filter beds by 1959 and, around 1969, the industrial site was connected to mains water.

3.8.  On maps of the time the industrial complex was called The Arc Works, where the company produced generators and electric motors.  It remained just Cromptons until 1927, when the company amalgamated with F & A Parkinson of Guisely, to form Crompton Parkinson, Ltd..  Later, the company ran into financial trouble over a commercial miscalculation related to the electrification of the railways. In 1968 it was taken over by Hawker Sidley, who closed the works.  However, for marketing purposes, although the production had moved to Hawker Sidley works elsewhere, the new owners established their Contracts Department at 198, New London Road (Now BBC Essex.) so that buyers would still be attracted to the goodwill of the quality attached internationally to the name of Chelmsford in the manufacture of heavy duty electrical equipment.

3.9.  In the following year, in 1969, the Arc Works site was purchased by GEC and became the headquarters, development and manufacturing location of Marconi Radar. The original company, Marconi Wireless Telegraph Company, had for many years occupied a manufacturing and administrative site near the railway station and had become and remained a major employer in Chelmsford until 1994.  At that time GEC had run down its activities in Chelmsford and finally disposed of the Arc Works site. A building known as F Block was leased to the Post Office, who remained there until 1970, but the whole site was being gradually cleared, except for the original 1896 building on Writtle Road, which is listed.  The land finally passed into the hands of Fairview Homes, plc. with planning permission for residential development; though the Borough Council had hoped that it would be possible to keep it for manufacturing and employment.

3.10. Memories of the industrial use of the site are preserved in some of the road names in the Village: Crompton Street and Parkinson Drive.  In the older part of  Crompton Street there is even an Arc View.  Further afield, Cromar Way, off Waterhouse Lane, is derived from a abbreviated combination of Crompton and Marconi.